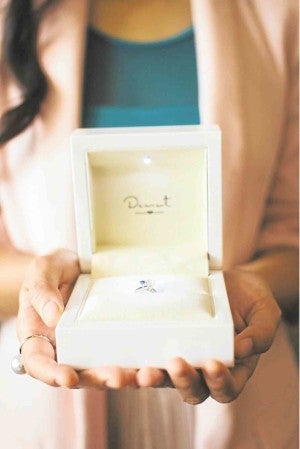 Dearest has endeared itself to discriminating jewelry buyers

For the couples who have discovered the recently launched bridal jewelry line Dearest, it is, so to speak, a gem of a find.

After all, it’s rare nowadays for people to find a jeweler patient enough to have their pieces customized exactly the way they want—something which Germee Ronirose Abesamis, Dearest’s founder, is all too happy to do.

“Our first clients wanted very raw rings. They didn’t want the usual shine, the usual polish. That was their personality, and they wanted to put that in their rings,” recalls the 31-year-old jeweler, who’s also a certified public accountant. “But all the [other] jewelers told them, no, just pick this one, because this is what’s trendy now. And then they found me, and I said, yes, and we could also do this, and this, and this … so now all our clients are like that, there’s a very personalized service.”

Abesamis, the second of eight siblings, was born in Pozzorubio, Pangasinan, where she was exposed to the jewelry business at an early age since her grandmother had an atelier then.

“I would sit outside, when I was 2 years old, talking to and entertaining her clients while they wait,” she says.

But while she loved playing with her grandmother’s pieces, Abesamis didn’t see it right away as a business she herself would get into. 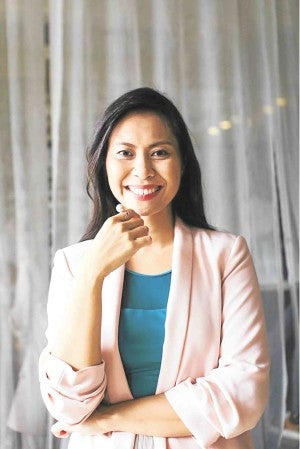 She says that as a kid, she saw jewelry as something that’s “for adults only.”

So she took up a more “practical” course in college: Accounting.

“I really didn’t know what I wanted. My friends chose Accounting, so I did, too; and my teachers were saying, go into Math. My dad’s an engineer, too. So I didn’t really mind. I didn’t not like it,” she says.

When she took the CPA board exam, Abesamis placed seventh among other passers.

She would continue on that career path well into her mid-20s. As financial analyst, Abesamis worked with ING Bank. She also tried to venture into fashion by opening her own gown and dress shop in Pangasinan called ACouture, which, unfortunately, only had a brief run.

“I had to close shop eventually, but the lessons in sustainability and business strategy that I learned were priceless,” she says.

Then Abesamis took on a part-time teaching job at UP, something she still does today from time to time.

“It’s a crash course on accounting for non-accountants, business owners who want to learn,” she says.

She was then given a chance to travel to France for a semester, thanks to a scholarship from UP, to earn her masters degree. Having always been fascinated with the French language and food, Abesamis says she would even imagine herself a damsel in medieval France every time she went home late from a party.

She also tried her best to learn how to speak French, but quickly discovered that she had difficulty understanding it when conversing with locals. Charmed by Europe, Abesamis decided to discontinue her studies with UP and enrolled in a different university, this time in Milan, Italy.

Already designing jewelry then as a hobby, it was her classmates and friends’ reaction to a necklace she once wore to school which initially sparked her interest to start her own line.

“It’s silver, a big pendant with a pearl in the middle. I put it on a pearl necklace, but it’s detachable. [I made it] while I was on vacation here [in the Philippines], and then I wore it one time when I was back in Milan. And when they saw it they said, Germee, what are you doing in this business school?” she recalls.

It was later on in Paris, some time in 2013, however, when Abesamis was finally convinced to create her own brand.

It all began with a collaboration with a Parisian designer who invited Abesamis to showcase her pieces in a fashion show.

“I took the leap of faith to start my jewelry business when I got a custom order from a Parisian lady. I went to her office at a very posh neighborhood, overlooking the Tour Eiffel. One of my friends who works for her then reminded me about a necklace that she bought from me, and she said, ‘See, Germee, you dress us in this office.’ I was very inspired,” she says.

Thanks to word of mouth and recommendations, Abesamis now has clients both here and abroad—with at least one celebrity, she discloses.

Aside from Dearest, she has another brand, Ronirose, which “is more for exploring my creative side,” she says.

And because her creations are all fine jewelry, some even with the rare pink diamond, Abesamis’ unique designs also command premium prices. (One engagement ring she showed had a six-digit price tag.)

That’s because she’s also very particular about the quality of her raw materials, says Abesamis, and is careful that she doesn’t break her clients’ trust.

Abesamis is also thrilled that she gets to work with Filipino artisans whom she praises for their excellent execution of her designs.

In a way, she says the business is also helping revive our country’s artisanal culture.

“We used to make jewelry, shoes … but now the industries are disappearing because of mass production in China. That’s the thing we really have to work on, how to market our products, because we have far superior products. But [the ones from China] are getting better,” she says.

On a more personal level, Abesamis says that her venture into creating jewelry is also a reflection of her life’s journey; and thanks to the business, she has now come full circle.

“My mom is really happy that I’m doing this … like I explored other things, but in the end I went back to my roots,” she says. “It’s standing on the shoulders of giants, as they say.”